The Tonga Islands – Swim with whales in Tonga

Sailing the Tonga Islands aboard a luxury yacht is a truly unique experience as Polynesia’s island kingdom more than lives up to its fairy tale name.

A genuine pearl of the South Pacific, the Kingdom of Tonga lies between French Polynesia and the Fijian Islands. It comprises 173 wild beautiful islands and islets, most reachable only by sea and all sparsely inhabited. Plan your exclusive cruise to the Tonga Islands where you’ll sail this enchanted archipelago in complete comfort and safety. Between July and October, it also provides the backdrop to one of the most surprising adventures afforded by Mother Nature: a close encounter with the hundreds of whales that have been coming to these warm waters for thousands of years to mate and give birth.
In the mating season, these majestic cetaceans abound, providing an everyday miracle, and if you wish you can also swim with them.

Enquire
Back to expeditions
PreviousNext
1234567

Sailing in the Tonga Islands

Tonga is one of the many destinations offered by Moorings and Sunsail, both world authorities in crewed and bareboat charters, with which Equinoxe Yachts has been working with for over 20 years. The group of Tongan islands around clustered around Vava’u, which is home to some of the most secure anchorages and sheltered bays in the world, is the perfect choice to explore aboard your luxury bareboat charter. The Vava’u archipelago is the northernmost group of islands and has the perfect climate for sailing, diving and snorkelling all year round.

Swim with whales in Tonga

A stunning natural phenomenon unfolds between July and November each year in the warm, sheltered waters of Tonga, particularly the islands around Vava’u. This awesome spectacle has inspired the archipelago’s own myths and legends, and is certain to utterly amaze and enchant you.
Hundreds of humpback whales, known for their incredibly beautiful and complex song, make their way to Tonga from the cold waters of the Antarctic to mate and give birth to the calves conceived the previous year. You can combine the innumerable whale watching opportunities afforded by your private charter cruise with snorkelling excursions organised by our handpicked specialist tour operators to allow you to get close to these majestic creatures in the water.

We suggested a 10-day bespoke cruise tailored around your personal interests and requirements to ensure you enjoy all the opportunities offered by this glorious archipelago to the fullest. After embarkation at Vava’u, you can sail to the islands of Kapa, Fale Vai and Nuku, glide through the Faihava Pass to the Hunga Lagoon, where you’ll enjoy unforgettable diving and fishing. After a short, fun sail to Foeata for some heavenly snorkelling, you can down anchor for the night at Vakaíeitu. Spend the next day exploring Luahaipu and the deserted islands of Luaa Fuleheu and Luahaipu.
On Hinakawea Beach on Euaiki, you can join in a Polynesian celebration with traditional Tongan dance. Next you can catch the dreamy Trade Winds as you hop from anchorage to anchorage on the remote islands of Maninita and Kenutu, negotiate the Tanua Tapu Pass or explore Taunga and the breathtaking reefs of Tauta, Mafana, Olo’ua, Nuapapa and Mariners Cave. All are utterly heavenly and perfect for snorkelling amongst wonderfully unhurried parrot fish, manta rays, tuna and blackfin shark in their natural habitat. An unforgettable experience and memories to cherish.

Lord Howe is one of just four islands to enjoy UNESCO World Heritage Site status. And deservedly so. By virtue of its sheer loveliness, incredible biodiversity and unusual geological evolution, it is home to incredibly complex and absolutely unique flora and fauna. The island’s remote location in the South Pacific and its coral roof, which is world’s southernmost, have made it a sanctuary for seabirds which throng its cliffs where they nest in their thousands.
Lord Howe is an isolated paradise still known only to the lucky few, light years removed from the usual tourist trail, making it even more special to those fortunate enough to moor there. However, only very few visitors are allowed so book your place well in advance!
Floating in the Tasman Sea between Australia and New Zealand, the remote South Pacific island is, however, less than a two-hour flight from Sydney or Brisbane on the Australian east coast. Lord Howe Island belongs to the state of New South Wales and was named after an Admiral who served in the English Navy at the end of the 1700s when only government vessels plying the route between Norfolk and New South Wales called there and its only inhabitants were sailors. Today, it is one of the world’s most exclusive holiday destinations offering spas, golf courses, unique bird watching and absolutely pristine waters for spectacular diving, snorkelling, surfing, kayaking and fishing.
There is a little slice of perfection for everyone on this heavenly isle. 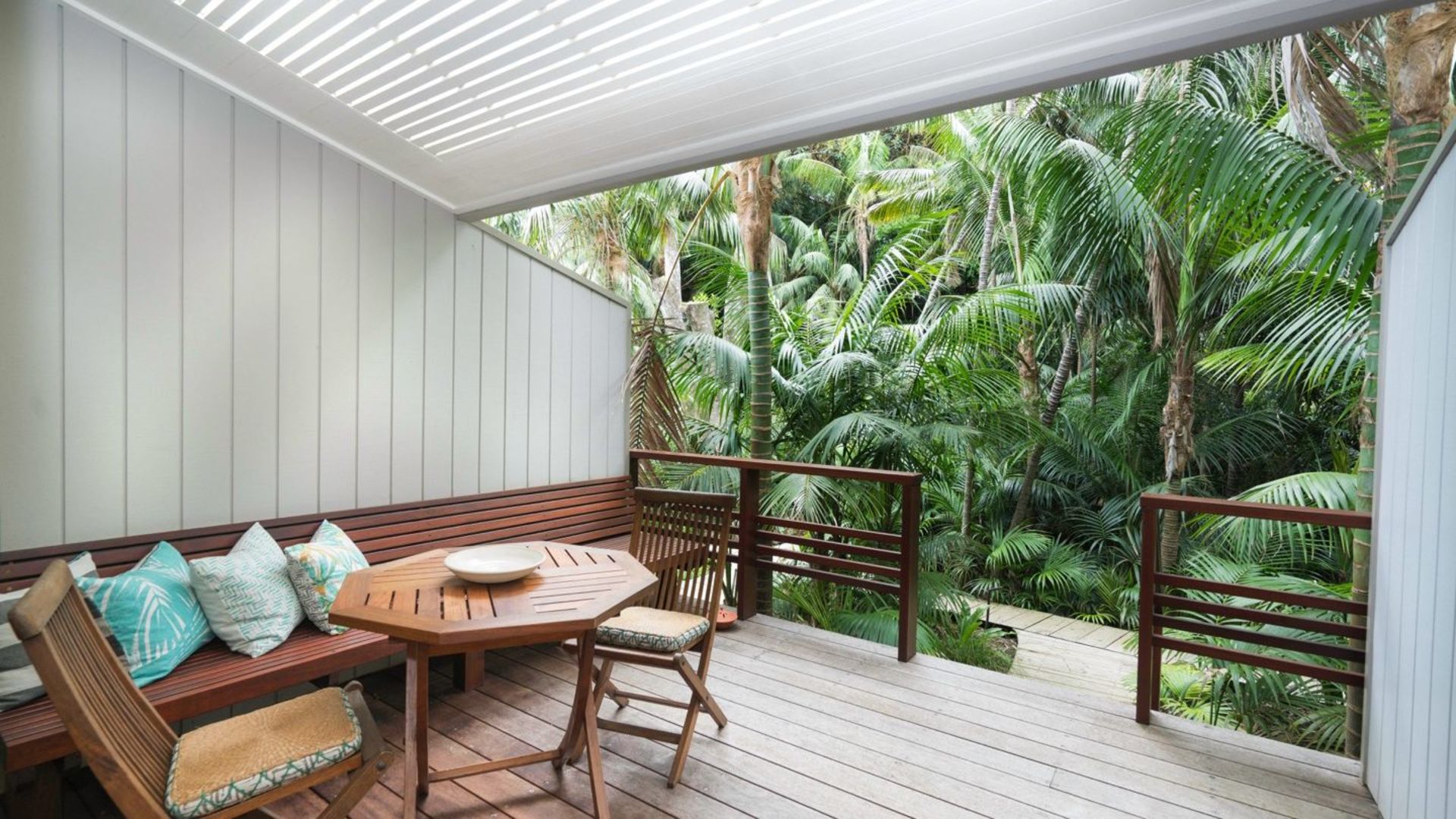 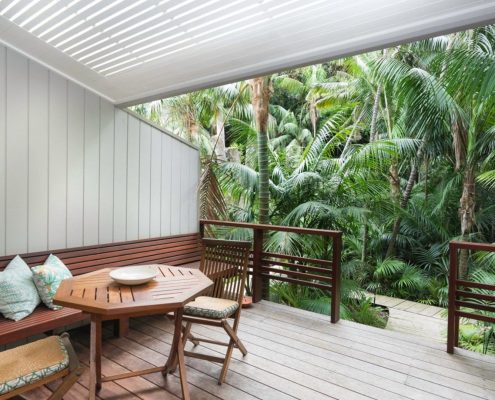 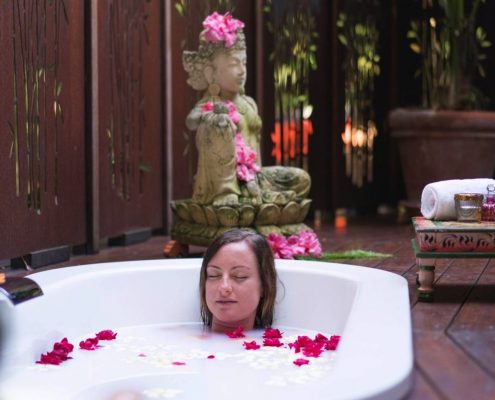 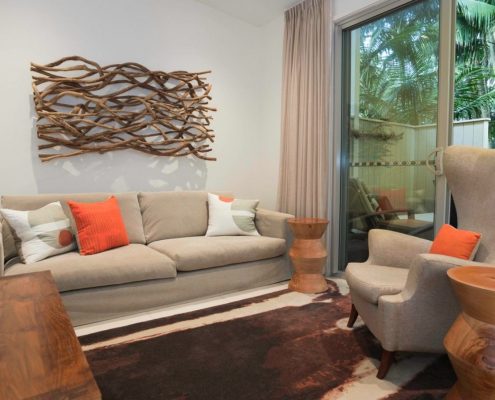 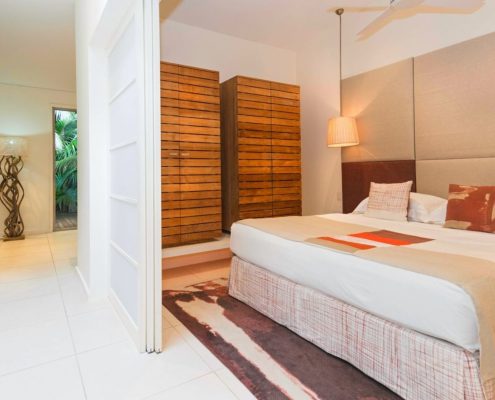 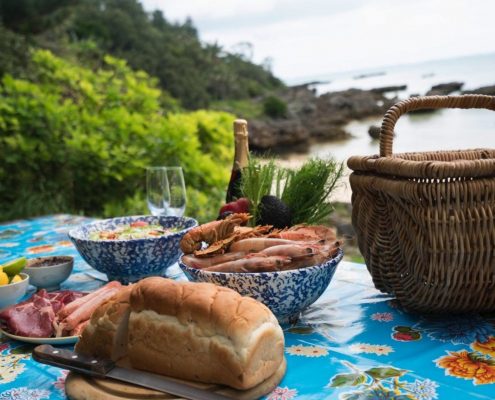 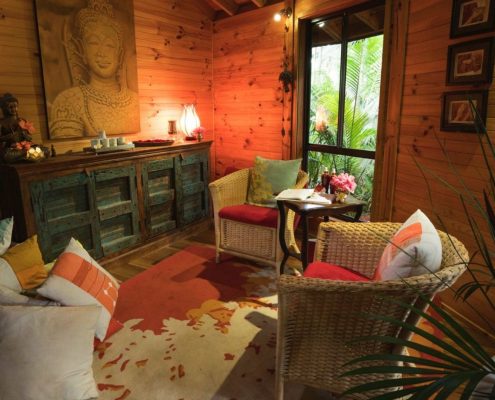 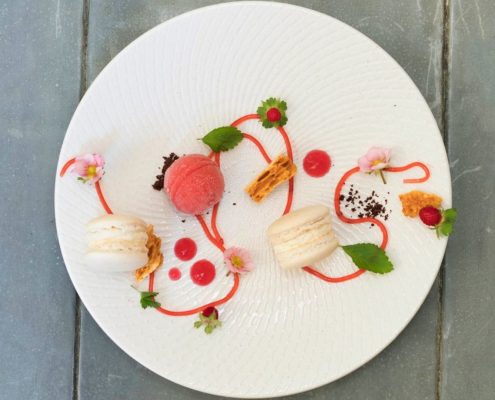 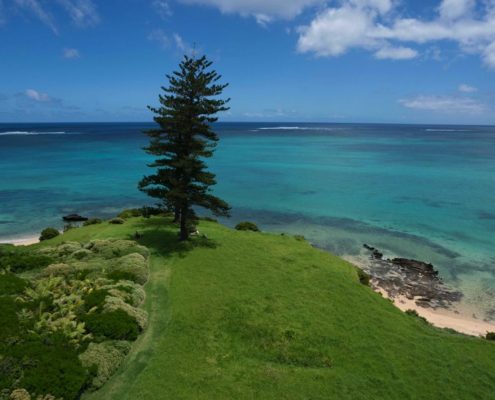 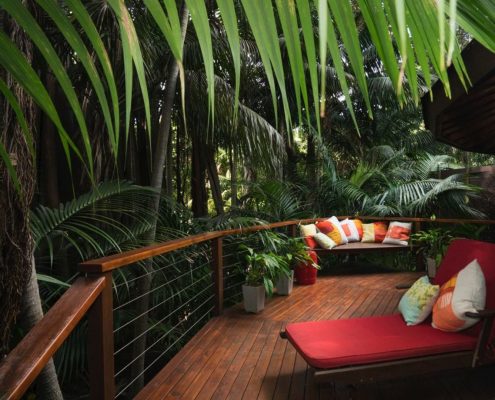 Although access to Lord Howe is controlled by issuing visitor visas to protect its habitats, there are still various hospitality options available, all seamlessly integrated with the surrounding nature. We recommend the exclusive Capella Lodge, the jewel in the island’s crown of luxury boutique destinations, offering spectacular views of both ocean and mountains. Another excellent choice is the Arajilla Retreat, an oasis of absolute peace and tranquillity with a warm, friendly, chilled-out atmosphere. Both offer a wide programme of island-based activities.
Lord Howe Island’s exclusivity means that it is essential to book both flights and accommodation well in advance.

If you want to extend your holiday beyond your stay on Lord Howe Island, we suggest a trip to mainland Australia. There are direct flights to Sydney and Brisbane, the capital cities of NSW and Queensland, both ideal starting points for any tour of Australia. Depending on the time you have available, your preferences and the season, you might choose a tour of the Great Barrier Reef and rainforests of Queensland, the deserts and aboriginal reserves of the Red Centre and Top End, the unspoilt natural paradise of Kangaroo Island inSouthern Australia or the gorgeously wild island of Tasmania. A dream holiday, yours to experience. 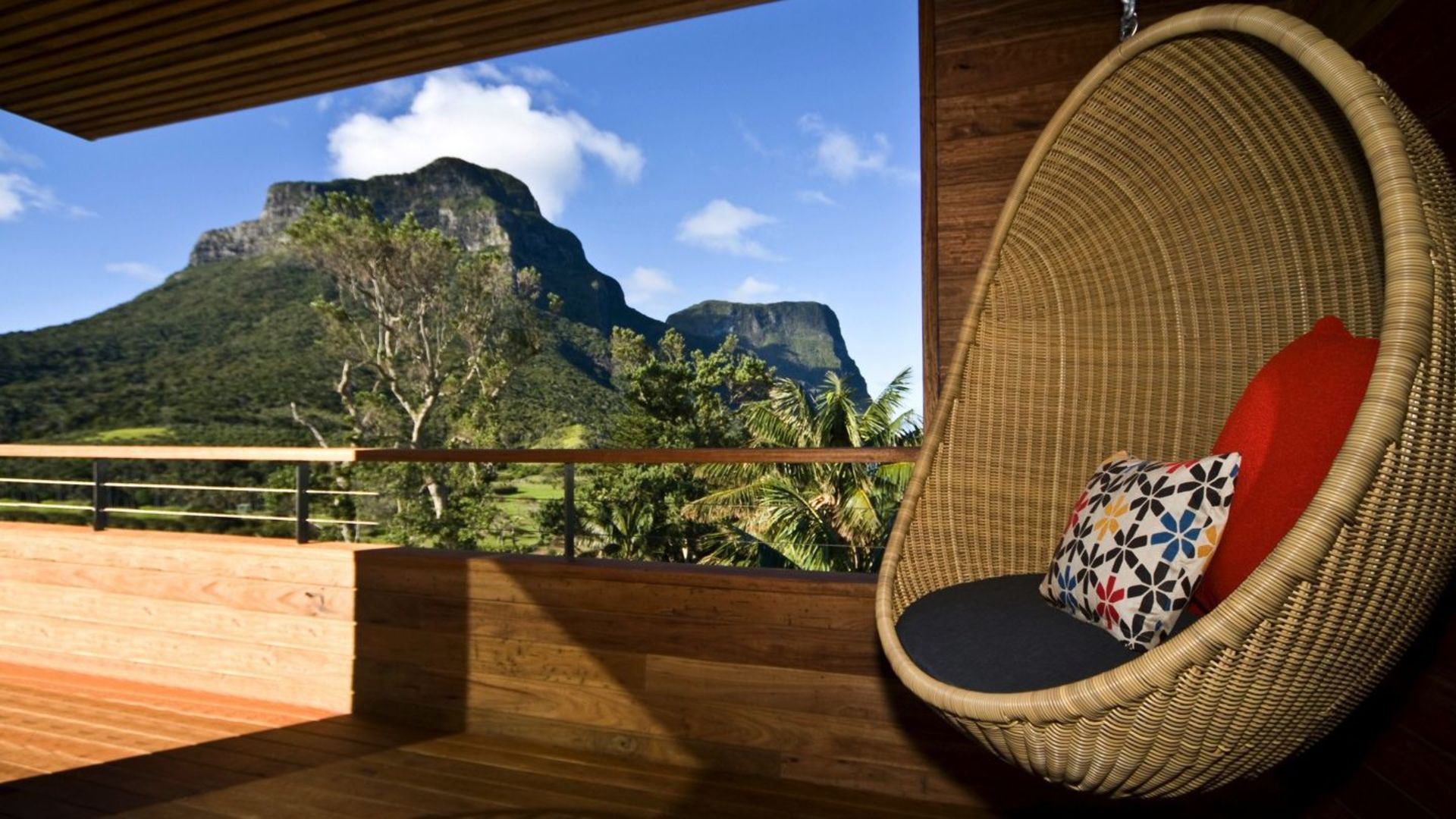 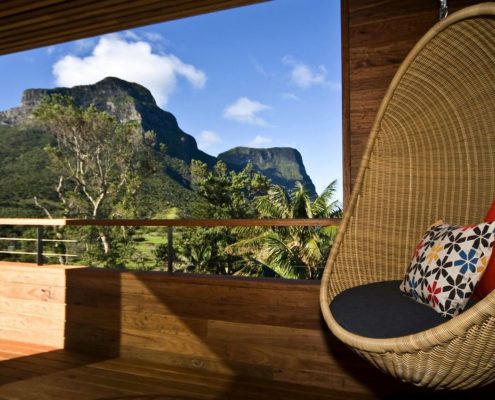 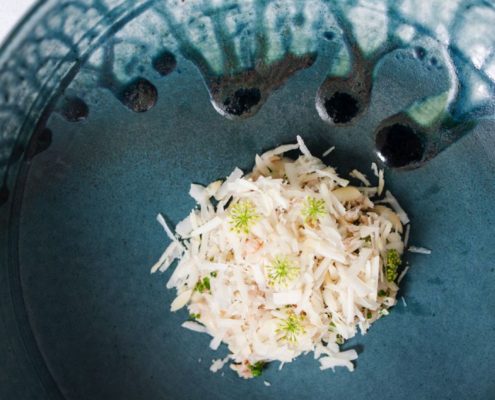 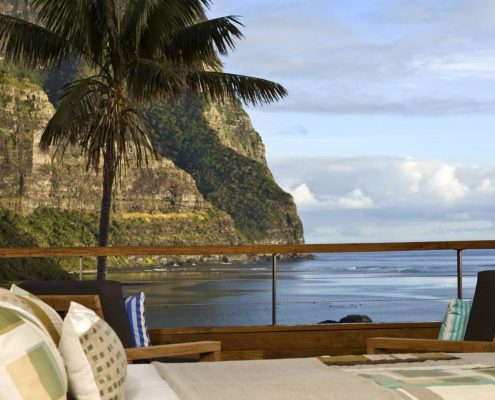 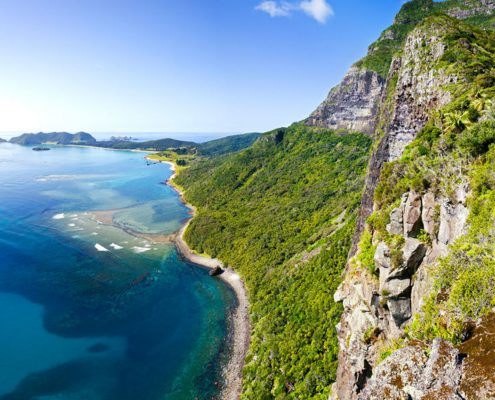 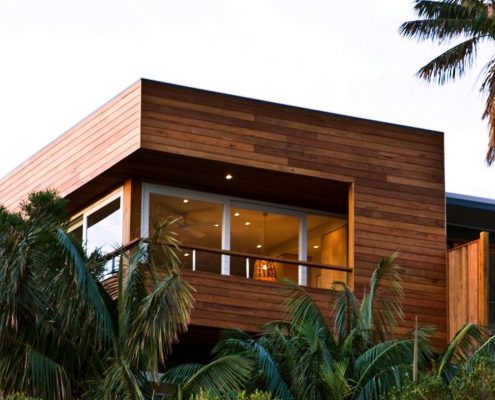 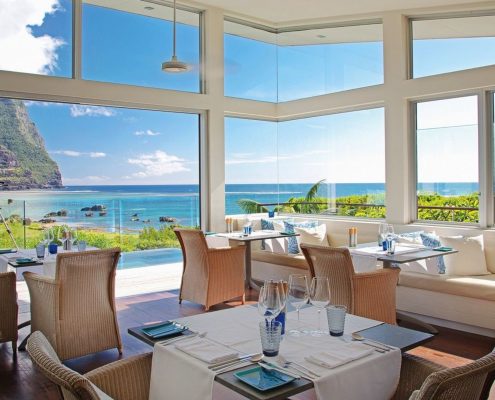 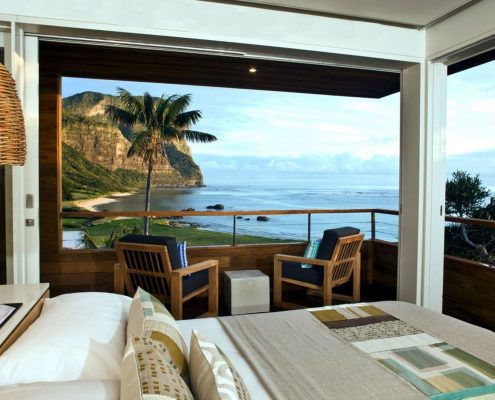